The new committee was voted in and discussions were started on which age groups would be running next season.

The club are hoping to run competitive teams at the following age groups:

There were a number of expressions of interest from people looking to help out at these ages but we are now looking to confirm coaches for our next meeting on Monday 4th August. We especially need volunteers at the U13 and U11 age groups, please contact us through our Facebook page or by email if you are available to help.

It has been a great year for the youth academy. At the same point last year there was virtually no committee, £20 in the bank,  and little future for the academy.

–          Purchased equipment to be reused in the following seasons.

–          Funding secured from the Dept of social development to put even more coaches through their IFA coaching badges in the following season.

–          Parents have shown their support of the club, coaches and kids throughout the year. We would not run without their generosity.

o   From turning up at matches to support.

o   Using their cars free of charge to transport kids to matches.

o   Most importantly for supporting the coaches at every turn, providing encouragement to the kids while, at the same time, not undermining the coaches.

But the biggest difference in the club has been the progression of the kids themselves:

–          The U13 and U15 teams has their first seasons in the North West Colerain & District youth leagues and, against all odds, managed to beat most of the teams in their respective leagues. This achievement should not be understated as they were playing against many established teams like Coleraine FC and Ballymoney United whose teams have been playing with each other for years.

–          The mini soccer setup has seen a huge explosion in numbers and talent. We are so oversubscribed at the minute that we will have to close registrations next season if we cannot source more help. The progression in the kids has been unbelievable, So much so that we are looking at the possibility of entering the 2006 age range in competitive competition at Ballysally next season.

It has enabled us to channel every single penny that the club receives for the youth academy directly back into the academy.

Even though it has been a exceptional year we will still have a few challenges for next season:

–          We need volunteers. The mini soccer needs more coaches and the other teams need to bolster coach numbers to take some pressure off of them. As mentioned we have funding secured for coaching badges and we would try to get new coaches on these courses as a token of our commitment to them.

–          Committee. The committee is very small so we would really welcome anyone who thinks they would have something to offer at committee level. It is not a huge commitment, we meet for an hour at most once a month.

–          AccessNi and Child protection. Most of the coaches do already have their AccessNi and we have very good child protection procedures, but we need to make sure that ALL coaches and volunteers are covered for the new season.

–          Costs. Without the grants and extra fundraising we would probably be struggling financially this season. Our biggest bill is to MDC for the astro turf, we should use the astro turf sparingly in the new season due to the huge costs.

So to sum up, we have come a long way from last season. I am proud to have been secretary for the year and I hope everyone else involved from coaches, parents and kids feel proud of themselves of what they have helped to achieve.

It has been an exceptional year for Ballycastle United Youth Academy; its mini soccer section has grown beyond recognition and its U13 and U15 teams have gone from strength to strength.

On Saturday evening all the youth soccer players, parents and coaches gathered together to celebrate a tremendous year and to reward the efforts of the players.

Due to the numbers, the annual presentation night was held in two sections on the Saturday evening.

The mini soccer participants went first and received their trophies, medals and goody bags (courtesy of Boyle’s Spar) for their efforts over the year. The club also presented a special award to remember young Logan Crawford. The annual ‘Logan Crawford Memorial Shield’ was awarded to someone who demonstrated a zest for life. Someone who lives each day to the fullest, who grasps the opportunities they are given, in particular, by making the most of their time at the mini soccer sessions. Essentially someone who embodies the spirit of Logan Crawford. This year’s award went to Chloe Jamison. 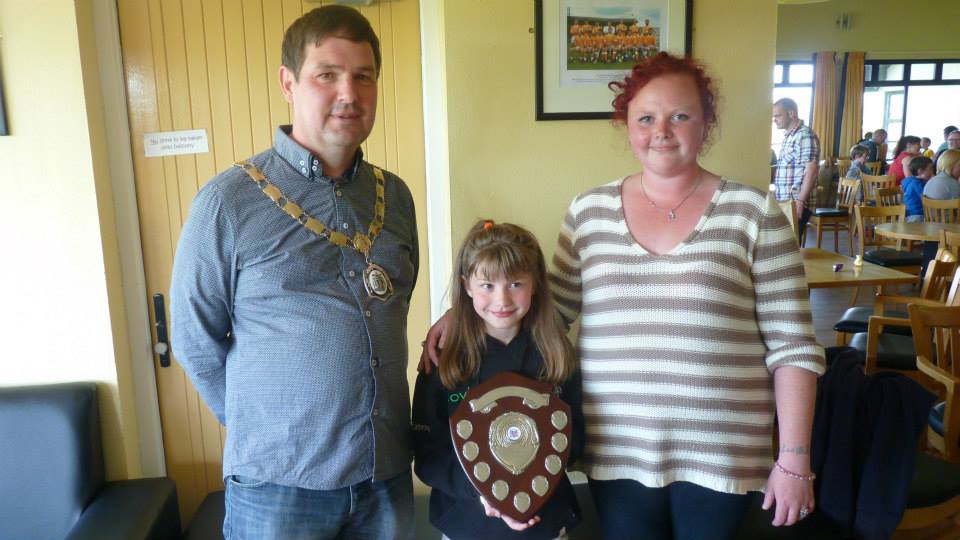 The U11, U13 and U15s went next and received their well deserved rewards for their exceptional performances while competing in the Coleraine & North West District Youth league.

The club would like to thank everyone involved in making the evening happen, in particular McQuillans GAC, Boyle’s Spar, The Golden Chip and RD Engraving. Special thanks also to all the parents and coaches who gave up their time and, often expense, to help throughout the year, in all conditions, to help make the club what it is today.

The club is also looking for volunteers and new coaches for the forthcoming season. If you feel that you would be able to help out then please contact us on our Facebook page or attend the youth academy’s AGM (taking place on Monday 21st July, 7pm, Sheskburn Recreation Centre). As with all our coaches, access ni checks will be arranged and IFA coaching will be provided to regular coaches.

For updates about the AGM, and all other Ballycastle United related news including pre-season training teams, please keep an eye on the club’s popular Facebook page: facebook.com/BallycastleUnited