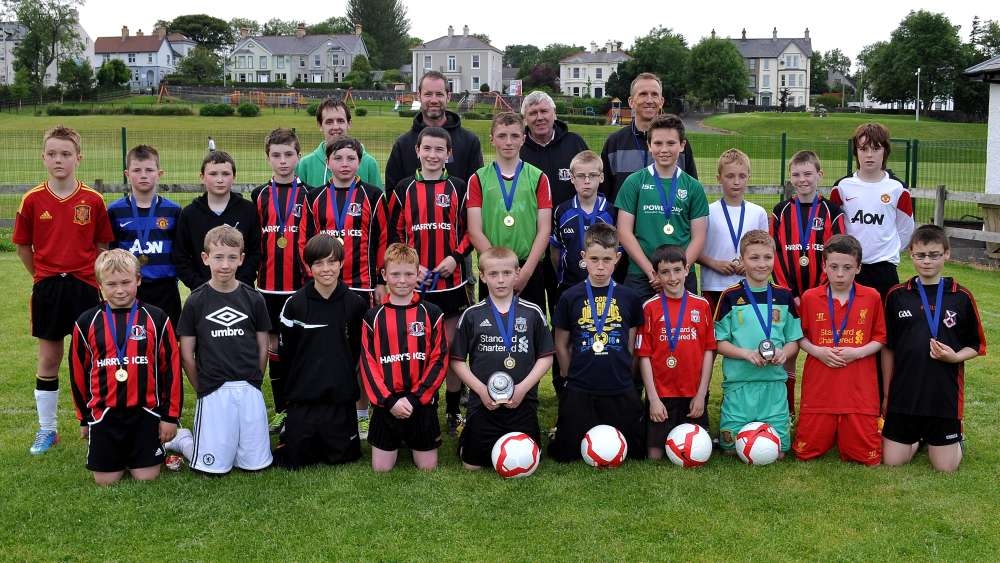 Players, coaching staff and parents enjoyed an end of season awards ceremony recently to mark the end of a very successful season for the team.  Mr. Billy Watson, Chairman of Ballycastle united, was invited to give out the awards to players and watch some of the talent on show during a 5 aside tournament.

Players were asked to vote on who they felt was the player of the year and this award went to Aaron Laverty who has done a fantastic job in defense all season and richly deserved the players player of the year award.  Second in this category was Dylan McMullan who made some terrific saves in goal during the season.  Two players were chosen as most improved and these awards went to Gary Maybin and Odhran Wright both of whom listened well to their coaches and steady gained in confidence over the course of the season.  The top goal scorer from the tournament and one of the youngest players on the team Eoin Magee was also acknowledged on the night.  Every player who attended received a medal for their efforts throughout the year.

“There is certainly great potential within the team and hopefully many of these young players will go on to represent the senior team or achieve what may be their footballing goals” said Mr. Watson.  He also took the opportunity to thank coaching staff who have volunteered their time and some of whom will be standing down at the AGM on the 9th July.  It was Mr. Watson’s request that those parents in attendance consider keeping the team going next year and he urged those with an interest in running a team to contact him at Ballycastle United.

All players from the Ballycastle under 13 squad were invited to attend the end of year awards night and receive acknowledgement from the chairman of Ballycastle United Football club.  Lets hope the team continues next year and football continues to develop in Ballycastle since it is obviously a sport the children really enjoy.