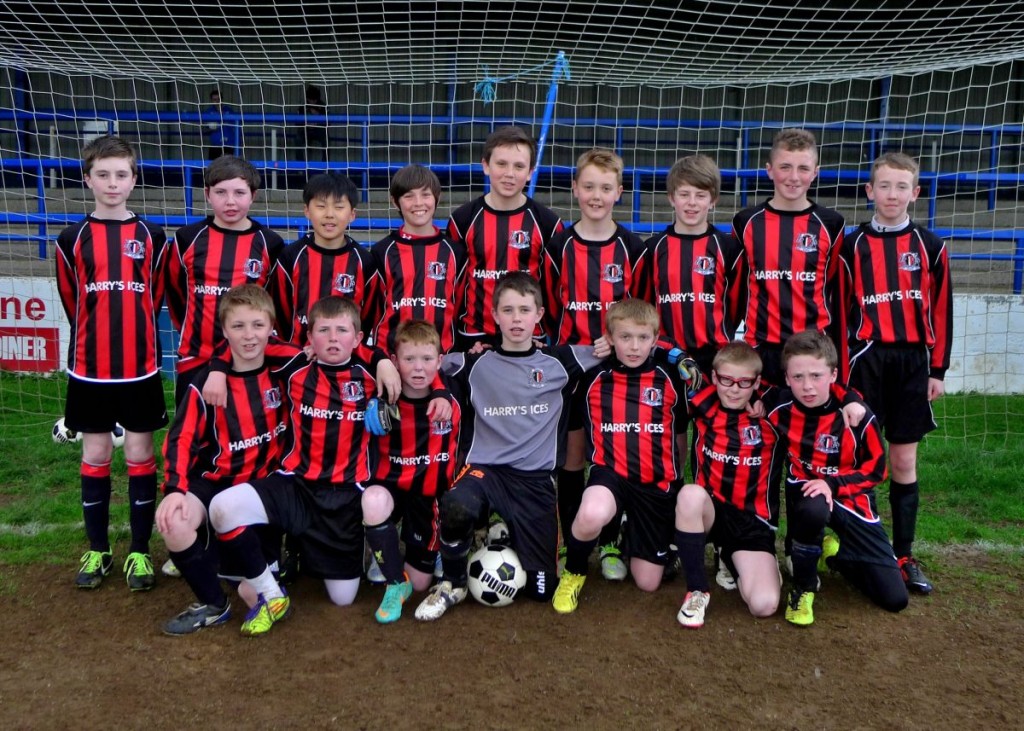 “It was a great experience for the boys to play under the floodlights at the show grounds in Coleraine and it will be something they will never forget.” Agreed the Ballycastle management team of John Madden, David Price, Byran Campbell and Patrick McLoughlin after the game.

In the opening 15 minutes Ballycastle looked like they might actually cause an upset against red hot favourites Dungiven as Ballycastle played mostly in the Dungiven half and Ballycastle strikers Ryan Hill and Connor McBride made some dangerously strong attacks through the Dungiven defence.  However Dungiven, the league champions, who have only lost two games all season, struck first with a well worked goal which Ballycastle could do little about.  This was followed quickly by a second disputed Dungiven goal which unsettled the young Ballycastle side and caused them to break for half time feeling very hard done by.

Although Dungiven have been beating other teams with impressive score lines all season it might have been more against Ballycastle had it not been for ‘man of the match’ Dylan Hill who together with another fantastic defensive performance from captain Aaron Laverty resisted a great deal of pressure from the Dungiven attack in the second half.  A goal from Dungiven soon after half time was the first of two more they were able to score against the valiant Ballycastle side who had battled so well.  The match thus concluded 5-0 but other notable Ballycastle performances were acknowledged by those watching in the stands from brave keeper Dylan McMullan and strong tackling from Sean Madden, Gary Maybin, Lorcan Donnelly, Tiernan McGlinn and others kept the score line down.

Once again there were numerous other good performances from promising players on this youthful Ballycastle side and it was encouraging to hear a comment from the Dungiven manager Martin Hazlett at the end of the match “You still have many players who will still be available to play at under 13 level next season and that was our position this time last year and now we are league and cup champions.  Ballycastle are in the same place we were last season so the team have a bright future.”

Very strong defensive and midfield performances supported the Ballycastle attacking players.  William Chao, Callum Campbell, Jack Price, Odhran Wright, Ryan Watt, Patrick McSorley and Oscar Egan all had solid performances.  They were all to be commended for their efforts.  As this was a high profile game it was very pleasing to see so many family and supporters who had traveled across from Ballycastle to cheer on the boys.  I am sure it meant a great deal to the lads.

Ballycastle Under 13 team lost their match against league winners Dungiven in the final of the cup on Wednesday evening.  Ballycastle concluded in the North West & Coleraine District Youth League one place above Coleraine which was a very creditable performance in their first season.  Making it through to the cup final was a new venture for Ballycastle United at this level.  Management at Ballycastle are giving the boys a well earned break after a long hard season.  Decisions as to what way the club will be managed for next year will take place at the Ballycastle United AGM (details of which may be found on the Ballycastle United website).  All those with an interest in football in Ballycastle are encouraged to attend and hopefully the more that can help out the better the experience will be for the boys.