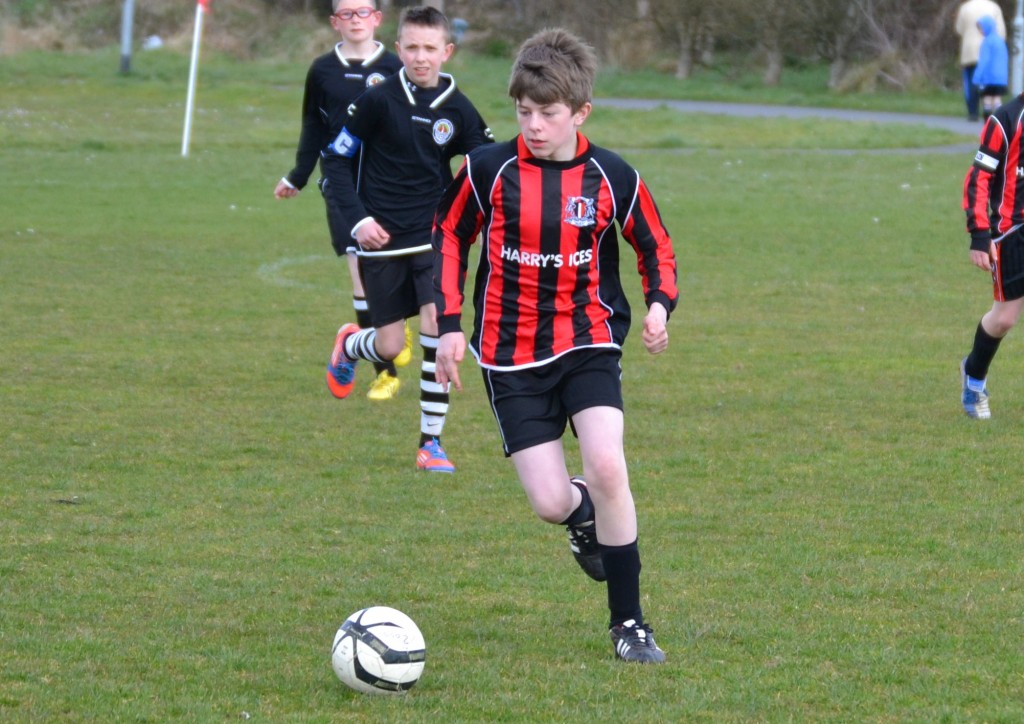 Ballycastle Under 13 Unlucky Against Bertie Peacock

Ballycastle United U13 were unlucky not to at least come away with a point in their closely contested league match away to Bertie Peacock on Saturday.

It was Ballycastle who started the best and played some lovely flowing football in the opening 15 minutes. Despite some good approach play and a few defense splitting passes from Dylan Hill, Aaron Laverty et al Ballycastle were unable to make their early possession count. A well organized Bertie Peacock side scored first against the run of play from a shot which came through a crowd of players and left the Ballycastle keeper, Dylan McMullan, unsighted. Ballycastle were without their midfield maestro William Chao and without his ability to link and switch the play Ballycastle struggled to find a way through the Bertie Peacock defense.

Ballycastle conceded again in what seemed like Bertie Peacock’s only other attempt on goal in the first half! However the young Ballycastle side showed good attitude and held Bertie Peacock to their two goal lead at half time. On a couple of occasions Ballycastle forward Ryan Watt had been played in well with fantastic through passes from mid fielders Lorcan Donnelly and Jack Price on the right hand side of the pitch but Ryan was denied a goal by the disciplined Bertie Peacock defense.

This match was one of the final games of the season in the Coleraine and District Youth League but the Ballycastle boys are already through to the final cup after a fine win against the same Bertie Peacock team two weeks ago. Perhaps the Ballycastle side might have come away with at least a draw as they continued to create chances in the second half. An excellent pass from Eoin Magee set Lorcan Donnelly on a race for goal from which he scored a terrific right foot shot low into the left hand corner giving the Bertie Peacock keeper no chance.

Ballycastle took off a defender and put Connor McBride, there goal scoring ace, on again. Despite wave after wave of Ballycastle attacks in the closing minutes, instigated largely by Ryan Hill, Ballycastle failed to find the net. On one such occasion Ryan Hill burst through the Bertie Peacock defense, showing great power and skill, but his last touch was just too close to the keeper and the Bertie Peacock goal keeper was able to clear his lines much do Ryan’s frustration.

Ballycastle fought hard with a great attitude and good spirit all the way to the end of the match but failed to find the elusive equalizer and the match finished 2 -1 to Bertie Peacock. All five Ballycastle substitutes were rotated into the team by Ballycastle management and every player gave their maximum effort which is what these games are all about at this level.

Ballycastle are playing with a very young team in their first year of this Coleraine and District Youth League. The other sides are vastly more experienced with many of the lads at the top of this under 13 age range.

Despite some great defending from Odhran Wright, Gary Maybin, Tiernan McGlinn and Aaron Laverty, Ballycastle were unable to stop Bertie Peacock from winning two goals to one at the end of full time. Had some of the excellent mid field work done by Jack Price, Dylan Hill, Callum Campbell, Connor McBride and Lorcan Donnelly paid off in the first half with even one goal from striker Ryan Watt the game may well have played out very differently.

Ballycastle came close through both Callum Campbell and Ryan Hill late in the game. Callum Campbell and Lorcan Donnelly were unlucky not to get a free kick or even a penalty which might have changed the game in the last few minutes. Eoin Maybin and Ciaran McNally made good contributions to the Ballycastle team but it was Bertie Peacock that seemed to get the luck of the bounce to clinch the match this week.

Ballycastle have the final of the cup on the 6th May at the showgrounds in Coleraine against league leaders Dungiven. Before that they have their last league match away to Ballymoney to complete.

Ballycastle under 13 lost to Bertie Peacock on Saturday. Ballycastle hope to play a few boys that have been very patiently awaiting their opportunity to make the panel this season when they face Ballymoney in the league next Saturday.