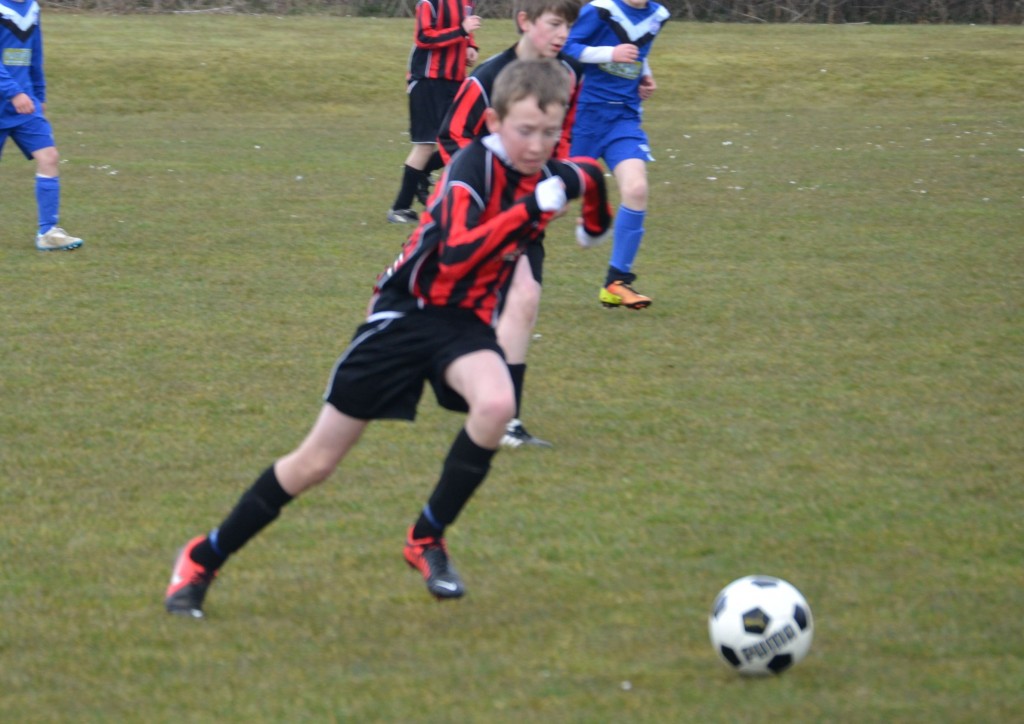 Ballycastle United U13 were under pressure early on from a well disciplined Ballymoney side on Saturday. Once again some of Ballycastle’s keys players were unable to play and were badly missed. However the young Ballycastle side showed good attitude and held Ballymoney to a two goal lead at half time. On a couple of occasions Ballycastle forward Connor McBride had been played in well with fantastic through passes from mid field playmaker William Chao but Connor was thwarted by the Ballymoney defence and keeper.

This match was one of the final games of the season in the Coleraine and District Youth League but the Ballycastle boys are already through to the final cup after a fine win against Bertie Peacock last week. Perhaps the brilliant win last week had left the Ballycastle side tired since Ballymoney continued to create chances in the second half but only scored once more due, in no small part, to the excellent goalkeeping of man of the match Dylan McMullan.

Ballycastle fought hard with a great attitude and good spirit all the way to the end of the match. All three substitutes were rotated into the team by Ballycastle management and ever player tried there best which is what these games are all about at this age group.

Ballycastle are playing with a very young team in their first year of this Coleraine and District Youth League. The Ballymoney side are vastly more experienced with many of the lads coming up through the age group teams and playing toward the top of this under 13 age range.

Despite some great defending from Odhran Wright, Gary Maybin, Tiernan McGlinn and Aaron Laverty, Ballycastle were unable to stop Ballymoney from winning three goals to nil at the end of full time. Had some of the excellent mid field work done by Jack Price, Sean Madden, Callum Campbell, Ryan Watt and Ryan Hill paid off in the first half with even one goal the game may well have played out very differently.

Ballycastle came close through both Callum Campbell and Ryan Watt late in the game. Dylan Hill and Patrick McSorley made a good contributions to the Ballycastle team but it was Ballymoney that seemed to be able to keep possession and play most of their football in the Ballycastle half of the pitch to clinch the match. With the game almost over the Ballycastle lads showed great fighting spirit and attitude once again and Ballycastle were rewarded with some very complimentary comments by the Ballymoney management after the game.

It has been a great learning experience for all the young lads on the panel this season. We have over 35 boys on the books for this under 13 team and selection based on attitude, attendance and ability remain key criteria for selection in this very competitive league. It was nice to hear the manager of Ballymoney say how talented he felt some of our players were. It has also been encouraging to see the team improve over the course of the season” said Ballycastle manager John Madden.

Ballycastle have the final of the cup on the 6 May at the show grounds in Coleraine but before that they have the last couple of league games to complete. They are away to Bertie Peacock next Saturday and then their final game will also be away to Ballymoney. It is important they finish strongly since these last matches will determine how they conclude their first season in the Coleraine and District Youth League.

Ballycastle under 13 lost to Ballymoney on Saturday. They will hope to regain the winning form, that saw them beat Bertie Peacock in the cup last week, when they face Bertie’s again in the league next Saturday.