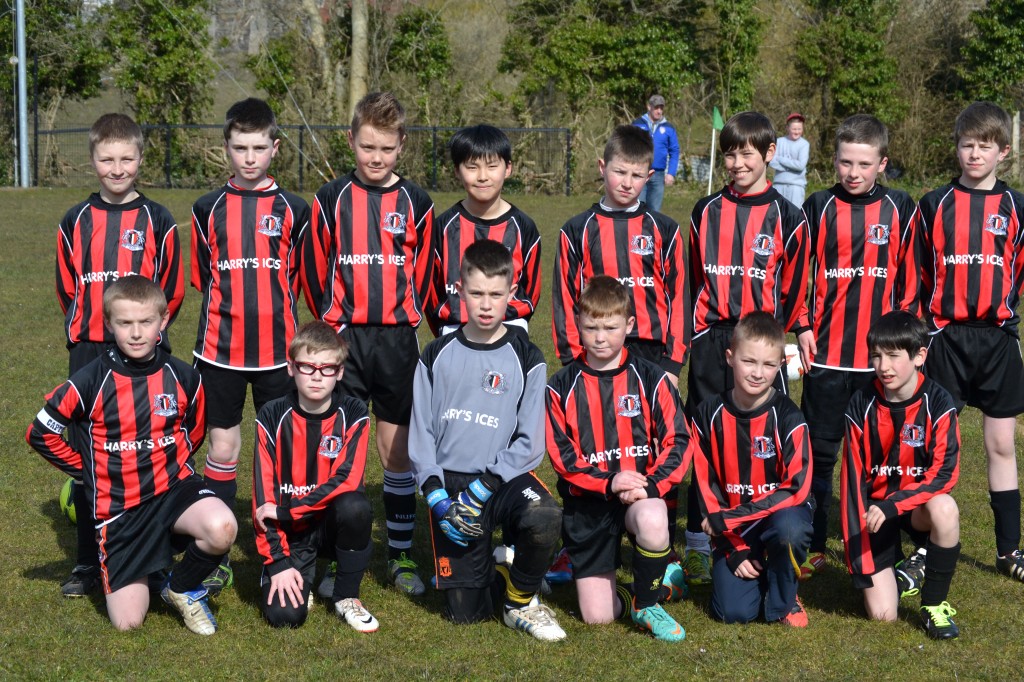 Ballycastle United U13 were up against it from the start with Bertie Peacocks due to the fact that some of their keys players were unable to play.

However, with a ‘never say die’ attitude, they pulled off one of the greatest wins of the season against a stunned Bertie Peacock Coleraine team on Saturday.

This match was the semi final of the Coleraine and District Youth League Cup and now the Ballycastle boys are waiting to see who they will face in the final.

The Ballycastle lads went a goal down when a Bertie Peacock’s shot took an unfortunate bounce just in front of goal to wrong foot the Ballycastle keeper. Ballycastle immediately fought back hard and got the equalizer with a great through ball from Lorcan Donnelly to Connor McBride who powered through a very strong Bertie Peacock defense to slot the ball home past an out stretched keeper.

With ten minutes left Ballycastle got a free kick just outside Bertie Peacock’s 18 yard box. Jack Price fired the shot into the wall which bounced nicely for William Chao to score a great volley from 20 yards into the top left hand corner.

Despite some great defending from Odhran Wright, Gary Maybin, Lorcan Donnelly and Aaron Laverty, Ballycastle were unable to stop an equalizer from a well placed Coleraine shot to take the game into extra time.  With neither team able to score in the first period of extra time it left for a very nervous last 10 minutes.

Ballycastle came close through both Connor McBride and Eoin Maybin but it was Bertie Peacock that broke the deadlock and scored to seemingly clinch the match. With the game almost over the Ballycastle lads showed great fighting spirit and attitude that even Alex Ferguson might have been proud of! Ballycastle were rewarded with a last minute penalty that was calmly taken by man of the match Lorcan Donnelly.

This sent this cup match into the exciting climax of penalties.  With the penalty takers decided it was up to Lorcan Donnelly, Callum Campbell, Ryan Watt, William Chao and Connor McBride to step up and send Ballycastle to their first cup final which they duly did much to the delight of the Ballycastle management and supporters.

“I am just really pleased for the boys, after some very close matches did not go our way this season, to see a game work out and the lads so delighted” said Ballycastle coach David Price.

With other notable performances from Patrick McSorley, Dylan Hill, Eoin Magee, Eoin Maybin and especially keeper Dylan, McMullan who pulled off a great save in the penalty shoot out, Ballycastle can go into the final with great confidence.

The last couple of league games for this young Ballycastle team will determine how they conclude their first season in the Coleraine and District Youth League but wherever they finish the boys will always remember their semi final win against Bertie Peacocks.