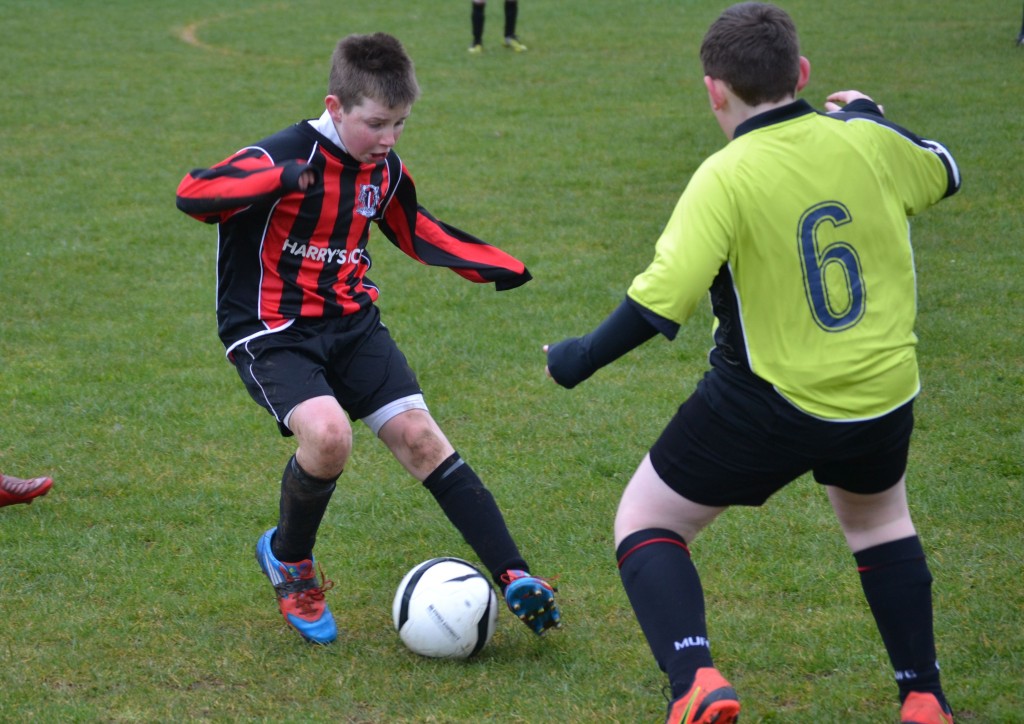 Ballycastle United under 13 team conclusively won their home match against a well established Stranocum side on Saturday.

Ballycastle have been so very close against all the top sides in the North West & Coleraine District Youth League since September and were back on winning form this weekend.

Stranocum traveled to Ballycastle and must have thought they were in for an easy match when they scored from virtually their first attack.  However after Ballycastle regained their shape and composure Stranocum found it difficult to break down the young Ballycastle team and failed to capitalize on their advantage.  Indeed both teams started to create chances for the remainder of the match.  Ballycastle had most of the possession for the rest of the first half and kept pressing forward before Ballycastle mid fielder Jack Price scored a great goal, at the best possible moment, just before the referee’s whistle blew to send the teams even into half time.

This psychological boost raised the morale of this talented young Ballycastle team and allowed them to come out strongly at the start of the second half. Ballycastle attempted to push forward again and this determination and positive approach paid off when a fine cross from Jack Price was superbly finished off by Callum Campbell to put Ballycastle ahead.   Stranocum players visibly looked shocked and dejected.  There then followed a double substitution by Ballycastle which Saw Dylan Hill and Ryan Watt replace Eoin Magee and Sean Madden who had both performed well to get Ballycastle to this stage of the match.  It was Ryan Watt who immediately made the first impact by scoring after a terrific solo run and a quality finish. Ryan rounded the keeper, having burst past a number of defenders with an incredible burst of pace, to calmly slot the ball home past the flailing Stranocum keeper and put Ballycastle 3 goals to one ahead.  It was now important for Ballycastle not to concede in the final minutes of the match so Patrick McSorley replaced Callum Campbell who had given 100% at this point of the game.

The score remained the same for the remainder of the game as Ballycastle cruised to a well earned victory.  It was justice for the Ballycastle boys who had battled so well over the past few weeks and had pushed many of the top sides in the league very close recently. Management and supporters were delighted for the Ballycastle lads after the match and rewarded them with lavish praise and their subs back to spend on sweets!

Once again Ballycastle players showed great attitude and continue to enjoy the experience of playing at this level with a very youthful team.  There are some real prospects in the team and with good coaching and development hopefully one or two of them may progress to high level football.

There could be no doubt on reflection that Ballycastle ‘man of the match’ had to be Jack Price.   Having scored with a terrific well placed shot, which shaved the under side of the bar from distance, plus provided the quality cross which set up Callum Campbell’s great finish, Jack appropriately deserved his award.  Aaron Laverty as Ballycastle captain put in yet another fantastic defensive performance together with Oduran Wright, Gary Maybin, Tiernan McGlynn and Keeper Dylan McMullan.  This Ballycastle defense did a great job to cancel out the Stranocum side that boasts numerous quality players.  Other strong performances from Lorcan Donnelly, Conor McBride and Eoin Magee continue to bode well for the development of this young Ballycastle side.  All the Ballycastle lads made their contribution to the team’s winning performance and they were all to be commended for their efforts.  Other young players continue to push hard for places in the team and as mentioned many of the Ballycastle under 13 team are still in P7 whilst some of the teams they are playing against can field sides mostly made up of year 8 and even some year 9 players!

Ballycastle under 13 team won their fixture against Stranocum on Saturday after pushing hard for a win against many top sides recently.  Their next league match is to be arranged next Saturday.  This latest win For Ballycastle will hopefully make all the difference to the players at this stage of the season and spur them on to future success in their remaining league and cup matches.