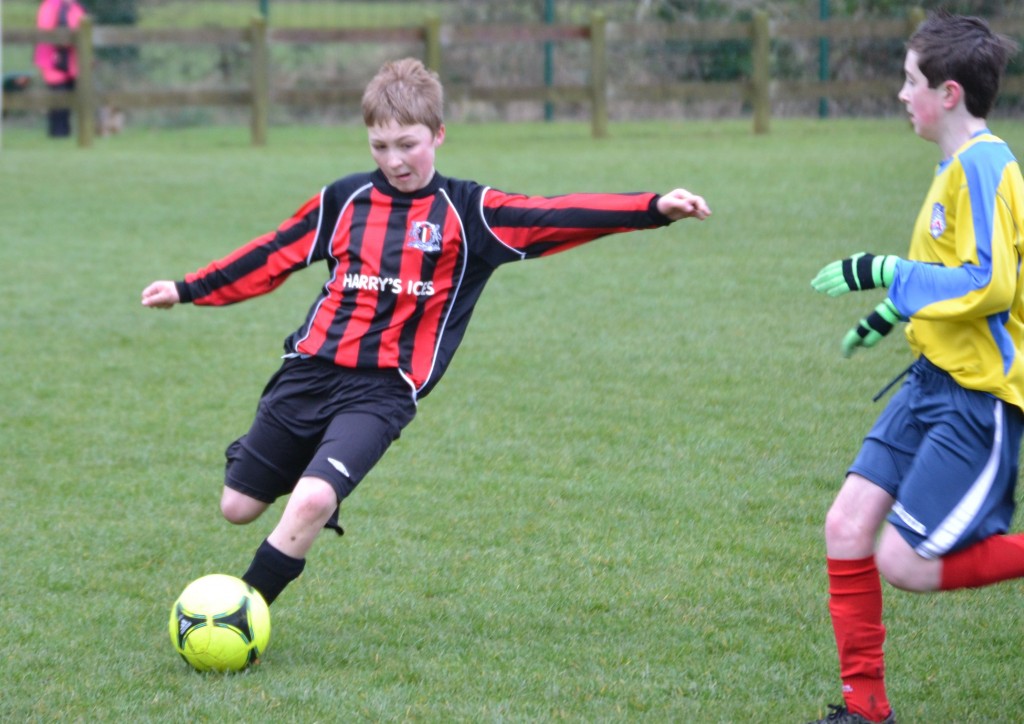 Ballycastle United under 13 team were very unlucky not to at least gain a draw against a top Coleraine side on Saturday.

Ballycastle have been so very close against all the top sides in the North West & Coleraine District Youth League since September.

Coleraine traveled to Ballycastle and found it difficult to break down the young Ballycastle side at the start of the match.  Ballycastle had most of the possession in the first half but it was Coleraine who scored first against the run of play before Ballycastle striker Callum Campbell scored a great goal from a powerful free kick to send the teams even into half time.  The match was eventually won by Coleraine 2-1 as Ballycastle attempted to push forward for the winner only to concede just four minutes before the end of the match.  It was a cruel blow which did not go unnoticed by the referee who commented on how unlucky the Ballycastle side was after the match.  Despite this once again Ballycastle players showed a good attitude and continue to enjoy the experience of playing at this level with a very youthful team.

Ballycastle ‘man of the match’ was once again Aaron Laverty who put in yet another fantastic defensive performance as captain.  Together with Sean Madden, Oduran Wright, Gary Maybin and Keeper Dylan McMullan the Ballycastle defense did a fantastic job to restrict the Coleraine side from scoring on numerous occasions.  Other creditable performances from William Chao, Dylan Hill and Jack Price in mid field bode well for the development of this young Ballycastle.  Very strong performances from the Ballycastle forward players including Conor McBride, Eoin Magee, Callum Campbell and substitutes Ryan Watt and Patrick McSorley all made their contribution and they were all to be commended for their efforts.  Young Eoin Maybin continues to push hard for a place in the team and it is worth noting that many of the Ballycastle under 13 team are still in P7 whilst some of the teams they are playing against can field sides mostly made up of year 8 and even some year 9 players!

Ballycastle under 13 team went down pushing hard for a winning goal against a very strong Coleraine side this Saturday.  Their next league match is at home against Stranocum next Saturday.  They drew away at Stranocum last time these two sides met so hopefully Ballycastle can use home advantage to gain that elusive win that would make all the difference to the players at this stage of the season.