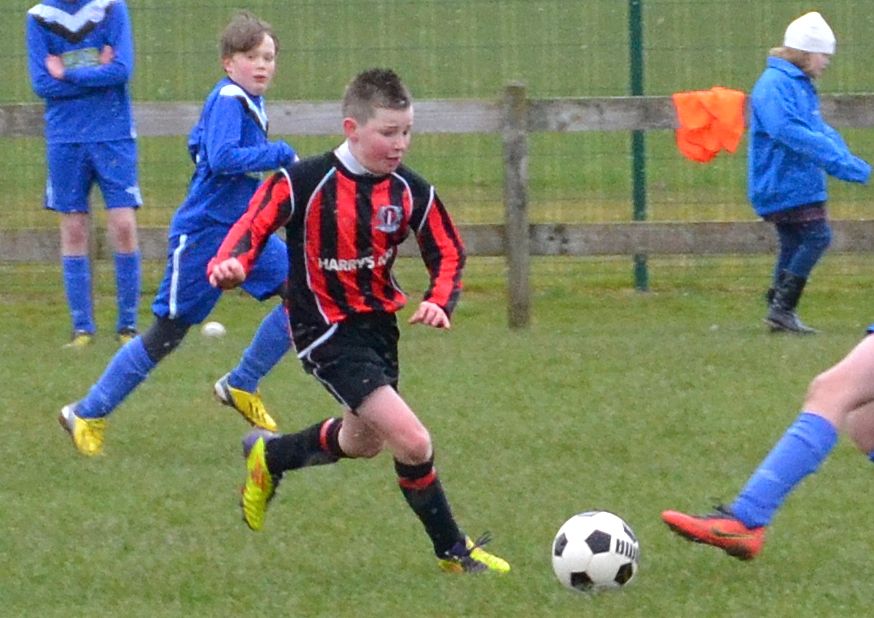 Ballycastle United under 13 team went down against a top Ballymoney side on Saturday.

Ballycastle have been in contention with all the top sides in the North West & Coleraine District Youth League, which started in September, winning two games, drawing once and running other well established sides close.

Ballymoney were the latest side to travel to Ballycastle and find it tough going straight from the start of the match.  Ballycastle had most of the possession in the first half but it was Ballymoney who scored twice against the run of play before Ballycastle striker Callum Campbell scored a great headed goal from a Ryan Hill corner to send the teams into half time.  The match was eventually won by Ballymoney 5-1 as Ballycastle attempted to run their entire bench of substitutes and allow as many as possible to enjoy the experience of playing at this level.

Ballycastle ‘man of the match’ was Aaron Laverty put in another fantastic defensive performance together with Sean Madden, Oduran Wright and Sean Brogan.  Late goals from Ballymoney including a converted penalty flattered the visiting team and seemed hard on the valiant Ballycastle side who had battled so well.  Other notable performances from newcomers Ryan and Dylan Hill ensure that the prospects for this ever growing Ballycastle club seem bright.

Once again there were numerous other good performances from promising players on this youthful Ballycastle side and it was encouraging to hear a comment from the Ballymoney manager Phillip Stinson at the end of the match “You have many talented individual players who just need to work on their team play and you have the makings of a very good side.  I thought their effort, attitude and commitment were outstanding”

Praise indeed from Ballymoney management and points well note by Ballycastle staff who were also well impressed by the Ballycastle boys attitude even in defeat.  Very strong defensive and midfield performances supported the Ballycastle attacking players and they were all to be commended for their efforts.

Ballycastle Under 13 team went down against a very strong Ballymoney side this Saturday.  Their next league match is at away against Coleraine next Saturday.  They will hopefully be bolstered by the return of their talented midfield play maker, William Chao, which will make team selection based on attitude, attendance and ability essential to secure the win.