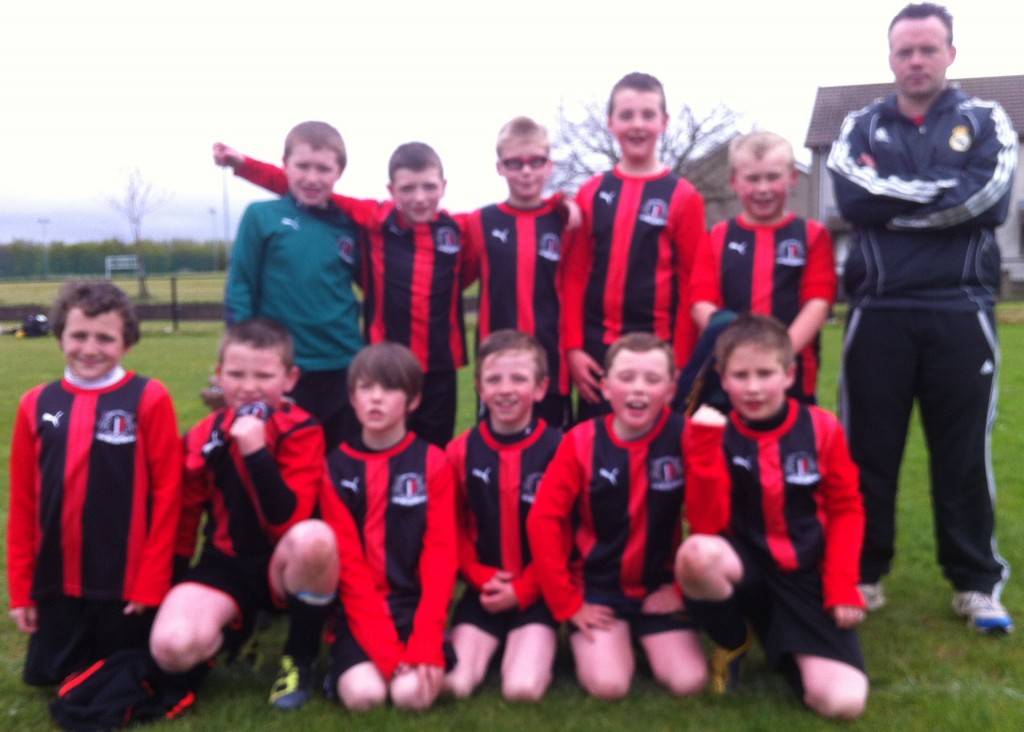 Dungiven U10s prior to kick off

Ballycastle United Football Academy under 10s stormed through to the semis of the North West District Youth League during a 13 goal feast of a game against Dungiven U10s in Coleraine on Saturday 7th April. The ‘Castle came out of the traps sniffing goal from the outset putting Dungiven under immediate and almost constant pressure early on.

A number of chances were missed early on before Lewis McKiernan slotted home his first early on following a great cross from Aiden Lillis. 1 – 0 the Academy. Aiden continued to put some lovely high balls into the Dungiven area, placing one with such accuracy that it beat the Dungiven keeper, 2 – 0 to Ballycastle.

Dungiven weren’t going down without a fight and counter attacked resulting in a number of corners, hitting the woodwork twice before finally being rewarded with a goal, 2 – 1.

However, a great kickout again by keeper Feargal McKiernan shortly after the restart was met by Lewis McKiernan who turned nicely, controlling the ball and beating the Dungiven keeper with a great finish, 3 – 1 the ‘Castle. The game developed into end to end stuff, both teams keen to go all out attack! A quick response from Dungiven, 3-2 and then almost straight from the restart scored again. The Academy boys had briefly lost their concentration and within one minute, lost a two goal advantage – all level at 3 – 3. The ‘Castle lads regained their composure (with much encouragement form the sidelines), some lovely passing football led to a chance for Lewis McKiernan to side foot the ball into the Dungiven net, 4 – 3 to Ballycastle.

At the half time whistle, the game had already produced 7 goals and there were more to come. Danny Connor slotted one home for Ballycastle within minutes of the restart. Some sloppy play for the Academy was rightly punished by Dungiven who took advantage of wide gaps being left in the Ballycastle defence, 6 – 4! Dungiven continued to put Ballycastle under pressure but some great hands from Goalie Fergal McKiernan prevented a comeback from Dungiven. For short measure, Feargal pulled of a Feargal special, once again slotting a goal in from a kickout, 7 – 4 to the Academy. The last ten minutes belonged to Ballycastle who scored further goals via Danny Connor and Cailin O Connor. The day belonged to the Academy boys and through they go to the NWDYL cup semis where I’m sure sterner tests await. However, the team played some nice pass and move football and have clearly come on in leaps and bounds over the season. Special mention for Criostai McAauley and Jack Eagan, rewarded a place in the team covering for absences, for their clear commitment to regular attendance at training. They both played very well indeed.

In any event, the lads have done exceptionally well to progress to the semis, that in itself is a wonderful achievement for the boys in their first year in this league.