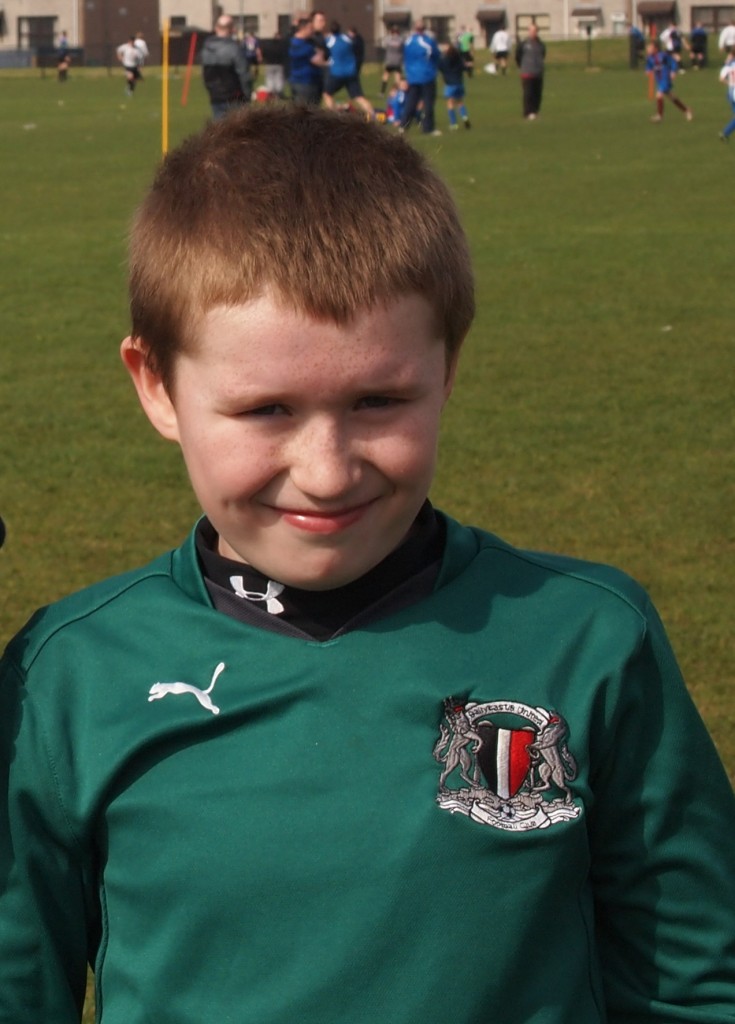 ‘Castle Academy under U10s played a stunner of a game against much fancied Bertie Peacocks U10s in the Coleraine sunshine on Saturday 24th March.

Bertie’s were clear favourites to win the game, finishing far higher in the league than Ballycastle who are still learning from their first experience in league football. However, ‘Castle clearly hadn’t read the script. Ballycastle kicked off with the wind behind them and missed an early chance before what developed into an amazing game for ‘Castle’s keeper Feargal McKiernan. Feargal’s kicking from goal was superb throughout the match but no-one expected him to score from a goal kick which he did within ten minutes of kick off!

The fun wasn’t over, much to everyone’s surprise, including Feargals, he did it again within five minutes! Berties were clearly stunned and rattled by this unlikely turn of events and ‘Castles tails were up. They kept the pressure on with few chances coming Berties way. The pressure was rewarded by another goal by Ryan Watt, 3-0 to the ‘Castle boys, a half time scoreline even the most optimistic of the travelling ‘Castle fans hadn’t expected. Paddy McFetridge encouraged the lads to stay focused and be wary of the second half pressure Bertie would put us under with the strong wind behind them.

As expected, Berties came out the second half strong with the wind behind them and Ballycastle struggled to get the ball out of their half. Corner after corner came Berties way and it seemed inevitable that their pressure would pay off and pay off it did. An early goal lifted Berties spirits, a second shortly after rattled Castle who lost their shape and concentration.

If the first half beloned to ‘Castle, the second was clearly Bertie Peacocks who scored an equaliser with five minutes to go. Castle got the odd break but couldn’t finish – Full time – Penalty shoot out.

Mini league decrees a four goal penalty shoot out with sudden death if all level after four. Aaron Faloona made the right shout on the coin toss and Castle were up first.

I’ll mention no names, the pressure was tough enough on the day and they were all brave lads to step up under pressure; first miss to the Castle, Berties struck a clean one to give them a 1 – 0 lead despite a great effort from goalie Feargal. ‘Castle scored the second, as did Berties who still had a one up lead. ‘Castle then missed the third but Feargal pulling off a great save to limit Berties third effort to a 1 goal lead. Castle had to score the next or Bertie Peacocks were through, to which they did. Guess who had to step up for the must score goal, yep, Feargal McKiearnan. He had to score to keep us in it and score he did – his hat trick. The momentum was still with Berties if they scored they were through, if not, sudden death. Dream stuff for Castle, Feargal pulls a save……sudden death time.

I suspect Berties next penalty taker looked at Feargal and thought this guys Superman – in any event, he missed it. A goal from Castle puts us through – and it was a peach. Castle go into the draw for the next round!

One thing is certain, no team in the hat will see Ballycastle as an easy draw. Wee Feargal, even in mini league football, probably made history – 3 goal hatrick hero – as the goalie.